A selfish person attempted to make Me wrong for not celebrating Thanksgiving and insisted that she would call Me on that Thursday to wish Me a Happy Thanksgiving. I told her that the part of Me that is of Native American decent is insulted because saying that to Me is like saying, “Happy Holocaust Day” to a Jew.

As expected, she insisted that it wasn’t the same thing; ranted in a way that deemed her version of history held more value than anyone else’s truth; insisted that I was being too sensitive (that old trick that good-ol’-racists use when People of Color speak up); behaved as if she had the right to decide for Me how I should feel; and chose to be insulted (the other old trick that good-ol’-racists (even those who don’t know/believe they’re racists) use when People of Color speak up).  It was her 12-year old son who pointed out to her that no one has the right to tell anyone else what is or isn’t an atrocity to them, and that if she wants her culture to be respected, then We must all respect others’ cultures — whether We understand their feelings or not. Out of the mouths of babes… Isaiah 11:6, New King James Version (scripture edit 11/120/18) 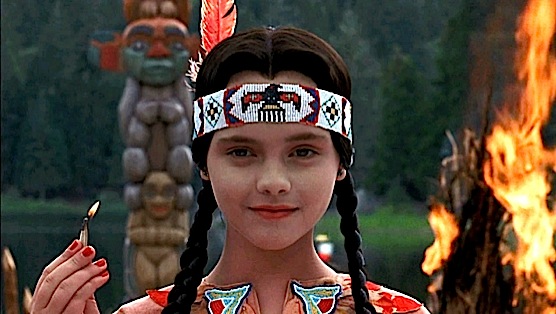 First, My many thanks to all of the wonderful people who invited Me to their Thanksgiving feasts!  It was so thoughtful and gracious of them and I consider it quite an honor to be asked to share their dinners with them.  Really, I am truly aware of how blessed I am to be cared for by so many. (To those who invited Me and read this, I expect you to be laughing at most of it as you do!  Be certain to invite Me to other gatherings, though!)

So, as I politely declined, I waited a day or two and then told My real reasons for not doing Thanksgiving:

1)  I am predominantly vegetarian and I have not eaten turkey for more than 20 years.  Since any type of meat or poultry in food will make Me ill, I always say that I’m a bummer at Thanksgiving dinners, but the truth is that I’m bummed at the boring salad that awaits Me, or worse, at the cook who thinks a “little bit of” whatever won’t “hurt” Me until I’m vomiting… and attempting to make it look like an accident while I aim it at the favorite rug or couch…

2)  I don’t like making people feel uncomfortable in their domains because I am not participating in the gluttony-fest.   Aside from the fact that people always feel sorry for Me that I don’t eat “meat” while I feel sorry for them that they do,  I have to endure the, “that’s how you stay in that shape” conversations.  This inevitably comes from the fattest person at the gathering, speaking with that second piece of pie in hand.

3)  Since I usually have to eat before I go to Thanksgiving dinner to ensure that I don’t get hungry, what’s the sense in going out if I’ve already cooked and can stay home and watch the football game?  And if I watch the game at someone’s home, I’m usually the only woman with all the males and the females get their feathers ruffled more than usual when I’m in a room.  Little do they know ~ or maybe they do know ~ that the only thing I would want their men to do is grovel at My feet with tributes.

4)  There are usually children at these affairs.  I don’t have the patience or the ability to be polite enough (and I have so much more politeness than seems to be the norm – especially these days) to tolerate “little precious” and the sugar-high s/he will be on the whole evening until the tryptophan kicks in.  And usually, with children, this never happens soon enough.

6)   I gave up illegal drugs before leaving My teens and there isn’t a drug in the world that can make Me able to deal with “family drama” ~ especially someone else’s family drama!

7)  I am blessed to have been born into a family of a very diverse group of cultures.  My tribe considers Thanksgiving a day of mourning.  It is the annual reminder that Our ancestors showed kindness to save the lives of starving barbarians who returned the gifts they were given with death to Our people, Our forests, Our buffalo and eagles, with prejudice, lies, destruction, and thievery on every level.

8) Added November 24, 2016: I don’t want to receive tons of text messages from people I don’t know because someone sent out a group text and folks don’t know how to set their phones to reply only to sender instead of to everyone in that group!  And there’s always that annoying person who wants to call to find out who you are…  Fix this on iPhone and Android.

9)  I give thanks every day and don’t need one day to celebrate all the blessings that I have.

However, bah-humbug this may sound, I look forward to My day of football and pasta on that third Thursday of November!

Yet, softy-that-I-can-be, I always consider the person who has nothing to do for the “holiday” (but wishes they did) and sometimes, I invite people to come out and have a drink with Me to share some of that “togetherness” that is so highly commercialized to sell you things to buy for Christmas presents.  Fortunately, We “ain’t buying it” and We give thanks for having the time to get together for a little fun in Our hectic schedules!

I was given an assignment in the 7th grade to find a poem to memorize and recite.  My wonderful Mother and I enjoyed reading through many poems in Our library at home and She found this one.  What We didn’t know at the time is that the assignment was for a NYCity-wide poetry competition.  I came in 2nd place with this entry – probably because the 1st place winner prefaced her recitation, “One Tin Soldier,” with mention that her brother was a Vietnam veteran, and the vast majority of the judges and entrants felt much less guilt about a poem about the horrors of a more recent war.   She was a classmate and We celebrated together while wondering why We won with poems about inhumanity and sorrow when other entries were poems about love, achievement, and greatness…  Even in the 7th grade, We were aware of how guilt motivates acknowledgement, recognition, and achievement.  Evidently, guilt is not a great enough motivator for positive change in how people treat each other.

I don’t know who this Indian is,
A bow within his hand,
But he is hiding by a tree
And watching white men land,
They may be gods – – they may be fiends – –
They certainly look rum.
He wonders who on earth they are
And why on earth they’ve come.

He knows his streams are full of fish,
His forests full of deer,
And his tribe is the mighty tribe
That all the others fear.
— And, when the French or English land,
— The Spanish or the Dutch,
They’ll tell him they’re the mighty tribe
An no one else is much.

They’ll kill his deer and net his fish
And clear away his wood,
And frequently remark to him
They do it for his good.
They he will scalp and he will shoot
And he will burn and slay
And break the treaties he has made
– – And, children, so will they.

We won’t go into all of that
For it’s too long a story,
And some is brave and some is sad
And nearly all is gory.
But, just remember this about
Our ancestors so dear:
They didn’t find any empty land,
The Indians were here.

Prepare for the flu season's exacerbation of COVID19 with My all-natural, "Winterizer" treatment; Calm down and stay calm quickly & naturally with INSTANT results! All FREE! END_OF_DOCUMENT_TOKEN_TO_BE_REPLACED

New research to boost your immune system against COVID19 & the flu..."The Winterizer" is one of those “old wives’ remedies” that works wonders. I swear by this treatment and highly encourage you to give yourself this gift. [...]

Because I care, I share. I have done quite a bit of research to protect Myself and the "covidiots" I have to deal with during this COVID19 plague. [...]